Todd is Rick's best friend. He is one of the few characters whose characters never made a TV appearance.

Todd has dark brown hair and brown eyes. He has a modern style of clothing, including baggy pants, jeans, and t-shirts. Todd is the character in this new series in September 2004. He is voiced by Matt Hill.

Like Kerstie in 2013, Todd was discontinued in 2008. It's not known if he was meant to be a love interest for any of Polly's friends or if he was related to them in any way. So far, he and Rick were the only male dolls in the franchise. 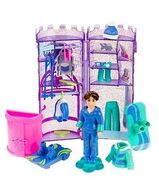