Rick is the director of all of Polly's adventures. He is also a rock star but is as kind as Polly and smart. He's willing to help Polly and her friends whenever they have a problem. Since he has a crush on Polly, he goes wherever she and her friends go, documenting any major events in their lives.

Rick has blond hair, blue eyes, and his skin tone is light like Polly. He wears a lot of tee shirts and jeans.

Two of his Halloween costumes were a pirate and a prince, which is meant to compliment Polly's princess costume. Rick is a character in the new series of September 2004. He is voiced by Andrew Francis. 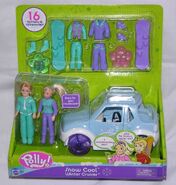 Add a photo to this gallery
Retrieved from "https://pollypocket.fandom.com/wiki/Rick?oldid=8010"
Community content is available under CC-BY-SA unless otherwise noted.