Kerrie is one of the main characters in the series until 2013. She was voiced by Debi Derryberry.

Kerstie is kind to all her friends and loves to bake. She is a baker in Pollyville. She is also funny and like Polly, she loves adventures and always telling stories about them.

Kerstie has light skin, brown hair, and blue eyes. Even though she's a baker in Pollyville, she is discontinued in the gang in 2013. Her baker appearance changes with short brown hair, a chef, and the same blue eyes. She was discontinued, due to her lack of popularity in the doll company. 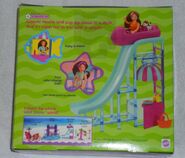 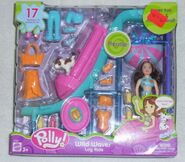 Add a photo to this gallery

Retrieved from "https://pollypocket.fandom.com/wiki/Kerstie?oldid=7996"
Community content is available under CC-BY-SA unless otherwise noted.