In "PollyWorld", John created a fancy amusement park called PollyWorld, where Polly's class participates in the competition show, Roll Like That. During lunch, he tells Polly he has a big surprise for her. John was engaged to a woman named Lorelei. Lorelei acts nice to Polly at first, and Polly becomes uncomfortable about getting a stepmother. What John doesn't realize that Lorelei is jealous of his affections for Polly and has no intention of being a mother figure to her. To have John to herself, Lorelei convinces him that Polly is stressed out and needs structure. He arranges for Polly to attend boarding school after the show ends.

After the race around Pollyworld, Beth inadvertently spills that she already knew about boarding school before Polly told anyone. When questioned, Evie reveals that Beth overheard it from Lorelei.

Polly becomes suspicious and realizes that boarding school wasn't John's idea at all. Shani catches a conversation between Lorelei and Beth scheming to get Beth involved, on video. Shani saves it on a DVD and they decide to show it to Polly's father. But once Polly sees how happy John was with Loreli, she can't bear to ruin his happiness and destroys the disc, ultimately deciding to have the best week ever with her friends before she goes to boarding school.

During Polly and the Pockets' performance during the final concert, Beth threatens to reveal Lorelei's secret in a sound booth, unless Lorelei helped Beth's team win. During their conversation, Beth accidentally sits on a button turning on a microphone, and it is revealed that the whole audience heard their scheming, including John.

John confronts Lorelei for lying to him and called off the engagement, leaving Lorelei devastated. Although it was not shown, he presumably escorted Lorelei out of PollyWorld. Later, John sits on a bench, feeling terrible that he didn't see through Lorelei, and apologized to Polly. John says that he'd call Samuel and convince him to come back, and he tells Polly that she doesn't have to go to boarding school. John and Polly are last seen hugging as they watch fireworks.

Polly's Mom and Dad are great but extremely busy parents. Polly’s mom is an aerospace engineer while her Dad is an architect and it’s their busy jobs that keep them from realizing her big little secret! 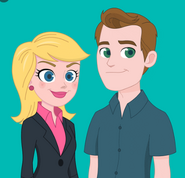 Add a photo to this gallery
Retrieved from "https://pollypocket.fandom.com/wiki/John?oldid=8040"
Community content is available under CC-BY-SA unless otherwise noted.