Ana is one of the main characters in the series. She is voiced by Nicole Buoma in the original series and absent in the new series. All toys of her have since been discontinued. She is a singer in Polly and the Pockets and also plays the tambourine.

Ana is an artistic girl with a sassy attitude. She is very good at drawing and painting. Ana is one of the characters in the original series in September 2004.

As a mermaid, Ana's skin tone is tan and her eyes are violet, and her hair is worn as a bun and is held together with a maroon hair tie with a purple sea sponge. She wears a pink single strap bikini top with a strap that keeps switching places. A pink dot textured band encircles her waist and below it is a bright yellow mermaid tail that has three purple sea sponges on it.

In Ana's core group of friends, there is:

The only family member that is known is Ana's brother. He is unnamed and mentioned in Lunar Eclipse when Ana says 'That reminds me! I was meant to help clean up the basement with my brother this weekend. And I was so looking forward to it!' (sarcasm) 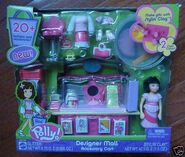 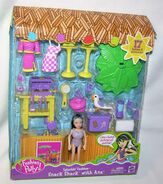 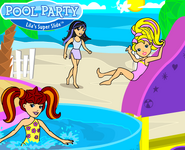 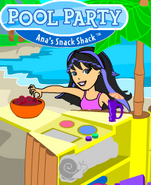 Add a photo to this gallery
Retrieved from "https://pollypocket.fandom.com/wiki/Ana?oldid=7827"
Community content is available under CC-BY-SA unless otherwise noted.